We ended up in the middle of the Olustee Battle Festival in Lake City, Florida, quite by accident. It’s hard to find a campground on the weekend without a reservation, so we sometimes stealth camp in places like Planet Fitness or Walmart parking lots, or on the street. We ended up downtown amongst the vendors for the festival, which is part of a celebration and reenactment of a Civil War battle, the only major battle fought in Florida. It was a big victory for the Confederacy.

This whole place gives us, what our friend Sarah Hart calls, “uh-oh feelings.” In all honesty, we don’t really like most street festivals. It would be hard to get us on board with a street festival honoring Brown v. Board of Education or Sojourner Truth Day, let alone one primarily featuring country cover bands, cheap goo-gahs and doodads, toy AR-15s, neon t-shirts sporting sexist and patriotic themes, and deep fried everything…all served in the context of latent racism. When I saw a black man, who was running a jewelry booth, watching the parade of Confederate troops go by, I wondered how it made him feel. I wanted to ask, but it seemed weird and presumptuous. When I saw two young boys walk by with their parents, waving child-sized Confederate flags, it just made me sad. Maybe I need to be more open-minded.

I think I understand the argument for preserving history and heritage, but when we drove into the area, I have never seen so many Confederate flags proudly displayed on poles, in windows, and on vehicles. They were everywhere. Maybe it was in honor of the festival, but when they were sometimes combined with four (yes, four!) Trump/Pence signs by the road, I have to think there’s something going on besides a deep love of history.

We’re going to attend the Battle Reenactment this afternoon. We hope to have some conversations with people to help us understand better. Since many of them will be armed, keep us in your thoughts and prayers.

I attended the reenactment. Betsy and Maybe stayed behind. Neither of them is fond of war or gunfire. 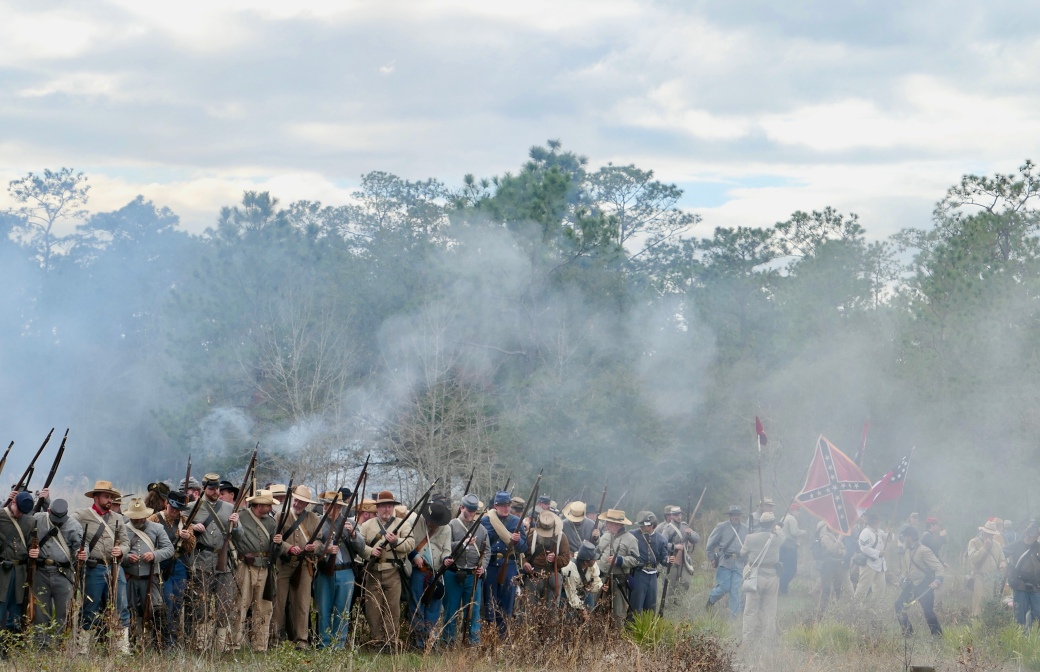 The actual battle was pretty incredible. The tents, the cavalry, the uniforms, the artillery…all of it was very authentic and dramatic. They don’t mess around with this stuff.

Before the fighting began, the announcer said, “The Union soldiers think they may win this one today. What do you think?” There was a deafening, “NOOOOOOO!!!” They were historically correct, but something about it felt more contemporary in its application.

During the battle, a three-year-old in the bleachers near the Confederate side of the field loudly proclaimed, “They’re not for America, ’cause they don’t have a America flag!”

There were a few people of color present, and I noticed nearly all of them were congregated near the Union end of the field. I was standing next to a black couple for a while. They were kind of joking around, so I said, “Who you rooting for?” I got a smile and a chuckle in response. 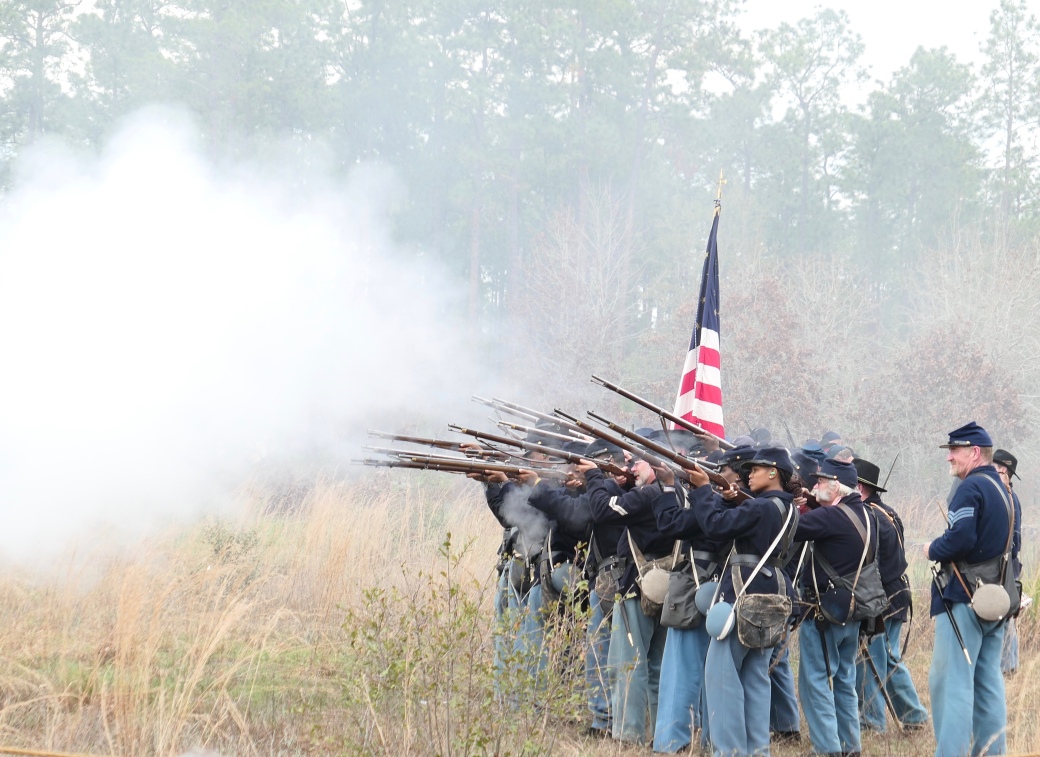 After the battle, I met Alan Farley, “Missionary to the Past.” He and his wife were all dressed up in 19th-century parson garb. I asked him what he saw as the biggest parallel between the Civil War period and the present. 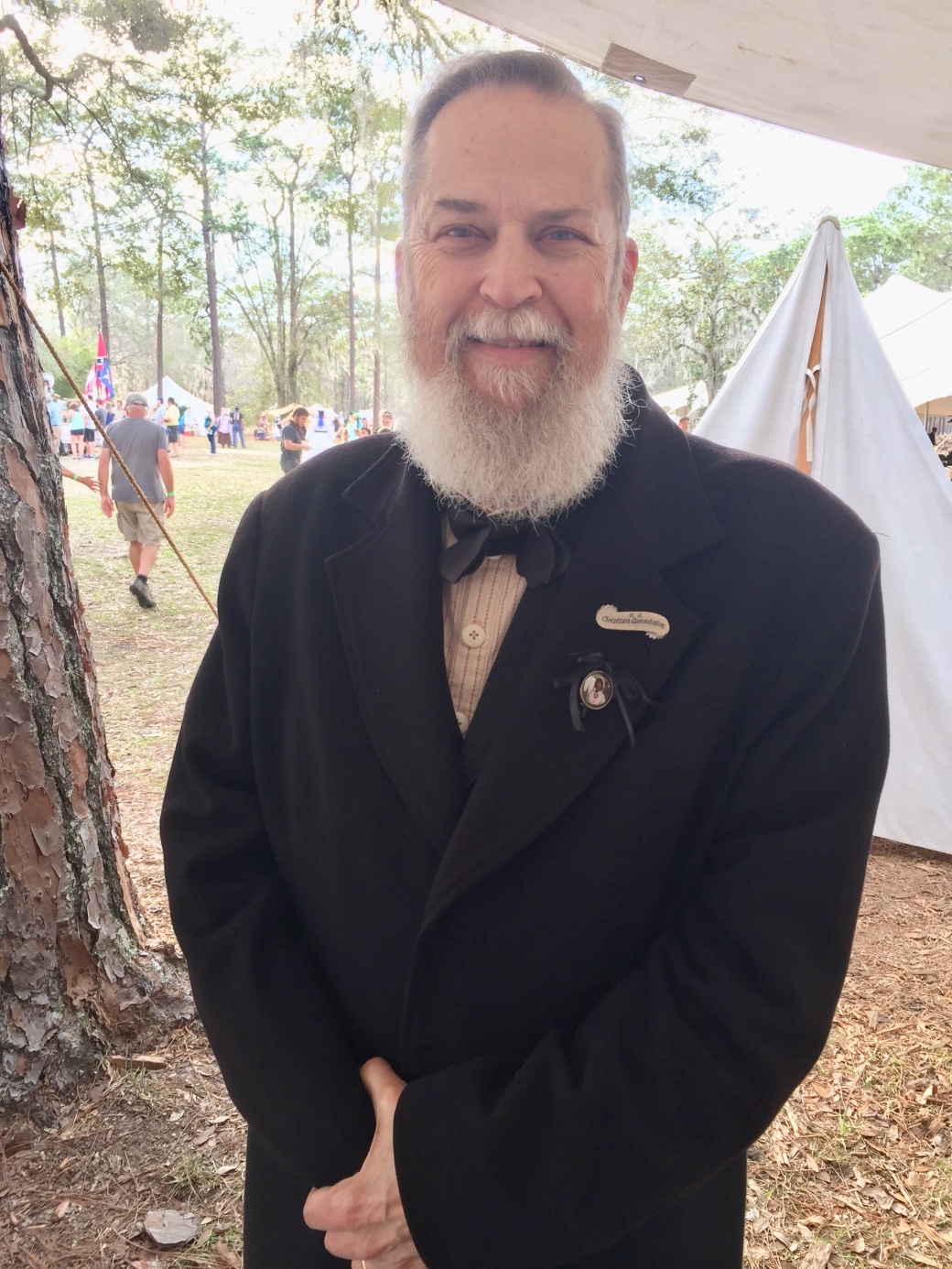 Alan: “Oh, the race issue, for sure. We had a president for eight years who fanned the flames of racial hatred. I don’t know if we’ll ever recover from that. And you have the Muslim issue. I mean, Jefferson had to deal with it too, back in our history, but it’s really bad today. There are places up in Michigan where they govern by Sharia law, and the police won’t even go in there. It’s terrible.”

Alan: “None of it will get better until we come under the lordship of Jesus Christ.”

Alan: “The problem is pride. It’s always been our problem. Until we get over our pride, things won’t get any better.”

On the shuttle bus, on the way back to the van, I met Alice. Her husband recently retired and sold his business in Oklahoma. They had moved to Lake City a week or so ago. She just got her conceal and carry permit. The gun is still in the box. She doesn’t like guns and refuses to get it out.